The 76-year-old wife of the traditional ruler of Ihitoha Uratta community, Owerri North council area of Imo State, Ugoeze Comfort Okoro, who was kidnapped reportedly died in the custody of her abductees after a ransom had been paid by her family.

The corpse of the woman was reportedly found along a village road in Akabor community in Oguta Local Government Area of the state, last Sunday afternoon. 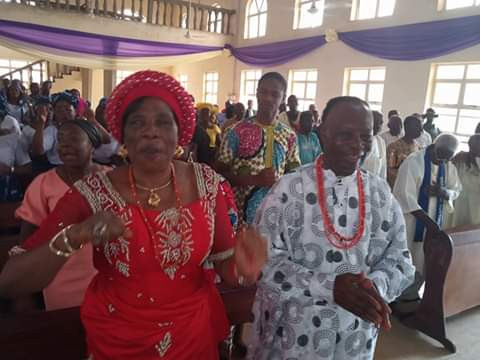 It was gathered that the monarch’s wife was kidnapped before her husband and other domestic staff on Sunday, January 26 2020 barely one month after she and her husband, HRH Dr. Emmanuel Okoro  celebrated 50th wedding anniversary.

Prince Paul Okoro, younger brother to HRH Eze Dr. Emmanuel Okoro Oha 1 of Ihitoha Uratta, who confirmed the incident described it as sad, saying the death came after the family had paid the ransom demanded by the kidnappers.

“On Sunday January 26, 2020, a group of boys stormed the palace here and gathered the guards and all around at point and met the Eze and wife upstairs around 8.30 pm.
They collected everybody’s phones including that of the Eze. They took Ugoeze away. It was after they left that one of the servants came to me to call the president general of the community that the unthinkable has happened,” he narrated.

“We waited for a call from them. But none came until three days later when they called his daughter, who is the wife of the member, representing Owerri Federal Constituency, Ikenna Elezianya, demanding a ransome. Her corpse was recovered at Akabor Oguta LGA where it was dumped” he added.

A member of the anti-kidnapping Unit, disclosed that the Police had arrested some suspects linked to the act.

My family wants to drown me – Cubana Chief Priest cries out