Air Peace, the nation’s and West & Central Africa’s leading airline, has announced plans to commence flight operations to Nigeria’s ancient city of Ibadan and the capital of the Pacesetter State, Oyo.
The new flight operations were announced at the weekend in Ibadan by the Chairman of the airline, Mr. Allen Onyema at the University of Ibadan, UI, Alumni Association Luncheon and Awards where he delivered a lecture on the theme, “Nigeria and the Rise and Rise of Ethnic Nationalism”.
In recognition of its unparalleled excellence, Air Peace at the event also bagged the Corporate Award of Excellence in the delivery of safe and comfortable flights. Appreciating the award from the institution, the Air Peace boss noted that, “Very soon, we shall start flying Abuja-Ibadan-Abuja daily, Kano-Ibadan-Kano and Owerri-Ibadan-Owerri 3 times a week”. 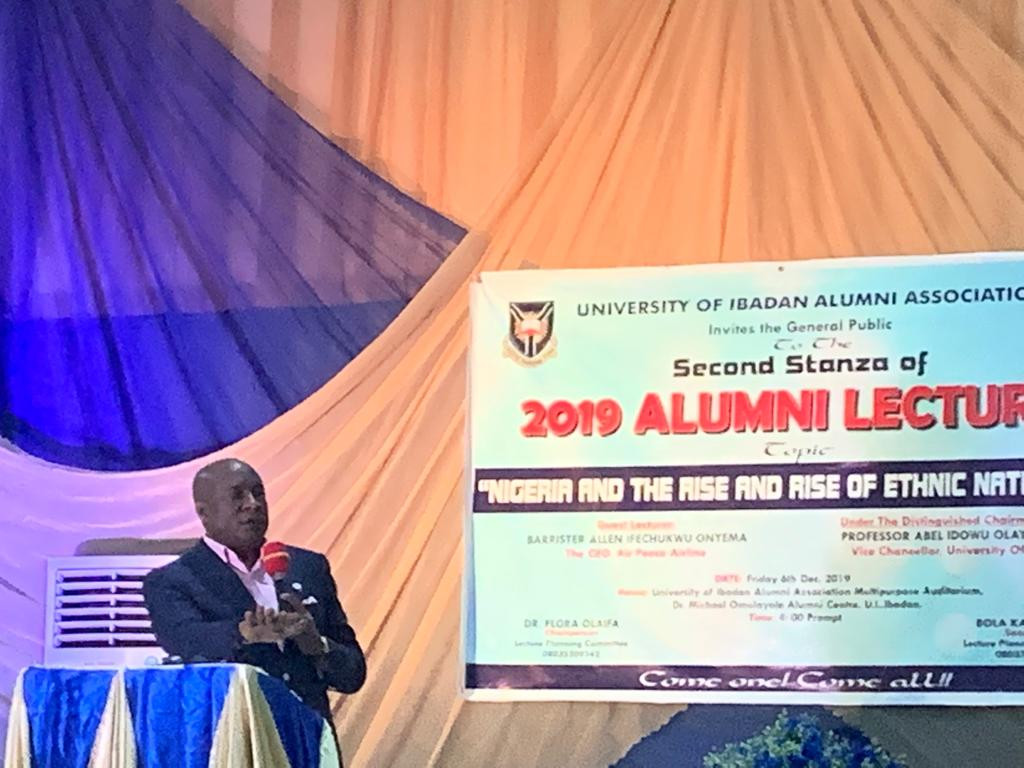 Onyema while delivering his lecture noted that our bane as a nation is our inability to live beyond the prisms of ethnicity. He also averred that, Nigeria’s multi-ethnicity is supposed to be a strength but it has become an albatross.
The UI alumnus, who bemoaned how Nigerians whip up ethnic sentiments in salient national discourses, remarked that ‘we must make a resolve to start harnessing the powers that lie in our ethnic composition and leverage them for the development of the country’.
While receiving the awards, Onyema thanked the Alumni Association for honouring him and his airline, Air Peace. His words, “My joy knows no bounds today. I appreciate this academia because it contributed to making me who I am today. I love my country and will continue to live a life of selflessness”.
He urged his fellow alumni to toe the same path by giving back to the University and the larger society. The Barrister revealed that, as part of giving back to the University and the city of Ibadan which shaped him, Air Peace would commence flights into Ibadan from Kano, Owerri and Abuja. He said: “Very soon, we shall start flying Abuja-Ibadan-Abuja daily, Kano-Ibadan-Kano and Owerri-Ibadan-Owerri 3 times a week.
This is part of our no-city-left-behind initiative and our plan to interconnect various cities of Nigeria, giving our esteemed customers more seamless connections. It will be recalled that just last month, the airline announced the commencement of Kano-Owerri-Kano flights.
The University’s Alumni Association specially celebrated the Air Peace boss in this year’s homecoming. Speaking, the Vice-Chancellor of UI, Professor Idowu Abel, described him as a detribalized Nigerian who has shown strong commitment to the advancement of the nation through his various humanitarian initiatives and socio-economic interventions, like the creation of massive jobs, peace missions and philanthropy.
In the same vein, the President of the Alumni Association, Professor Elsie Adewoye, expressed gratitude to Onyema for accepting to be part of the homecoming and serving as the Guest Lecturer. Adewoye, who acknowledged the unequalled strides of Onyema in his chosen turf, added that the institution was proud of him and implored him to keep impacting lives. She noted that the CEO was being honoured because of his historic evacuation of 503 Nigerians from South Africa during the xenophobic onslaught. 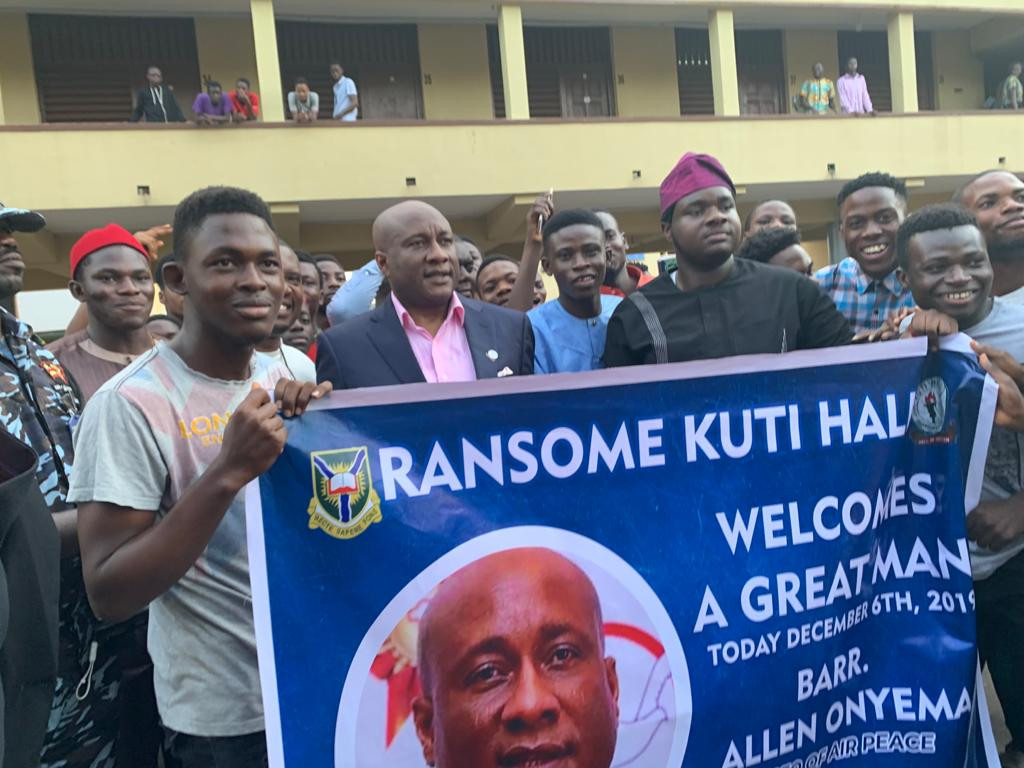 The highlights of the homecoming were Onyema’s visit to the VC of UI, the Law Faculty and the Ransome Kuti Hall where the students heralded him, chanting songs in his praise. Onyema, who was gifted with a symbolic ‘drum of peace’, charged the students to eschew all forms of vice, believe in themselves and embrace virtuous conduct. He also affirmed his support to the growth of the institution.

The UI Alumni Association Lecture and Award Ceremony is a platform where the University’s alumni cross-pollinate ideas on key national issues and get recognised for excellence in their respective fields. 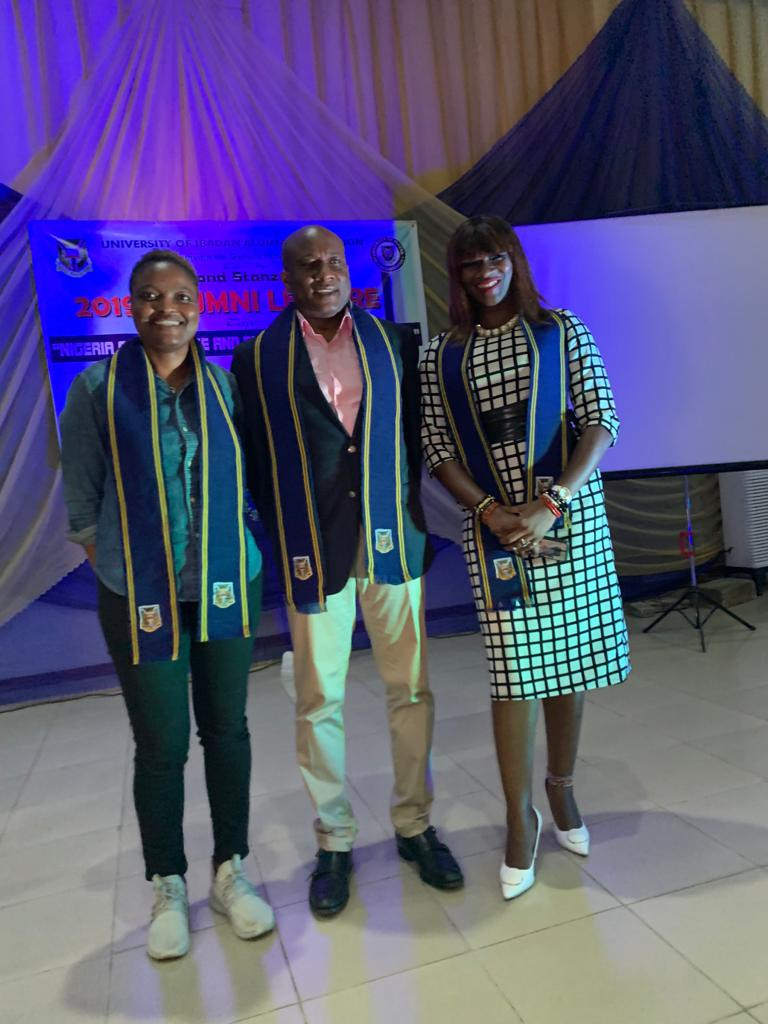 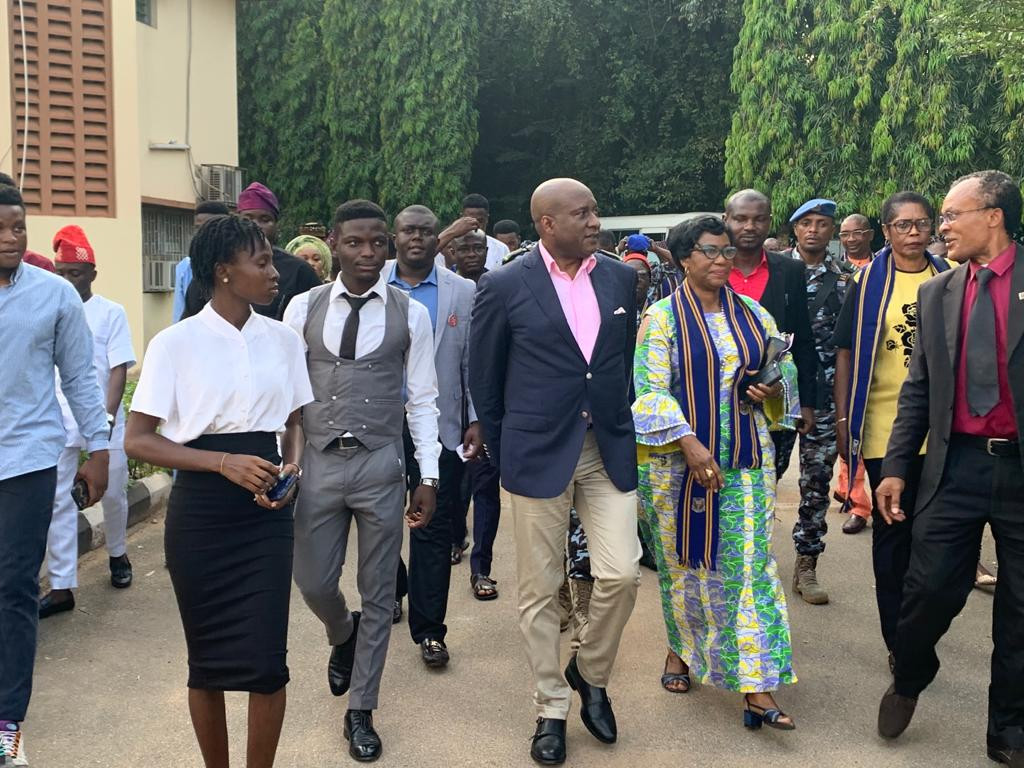 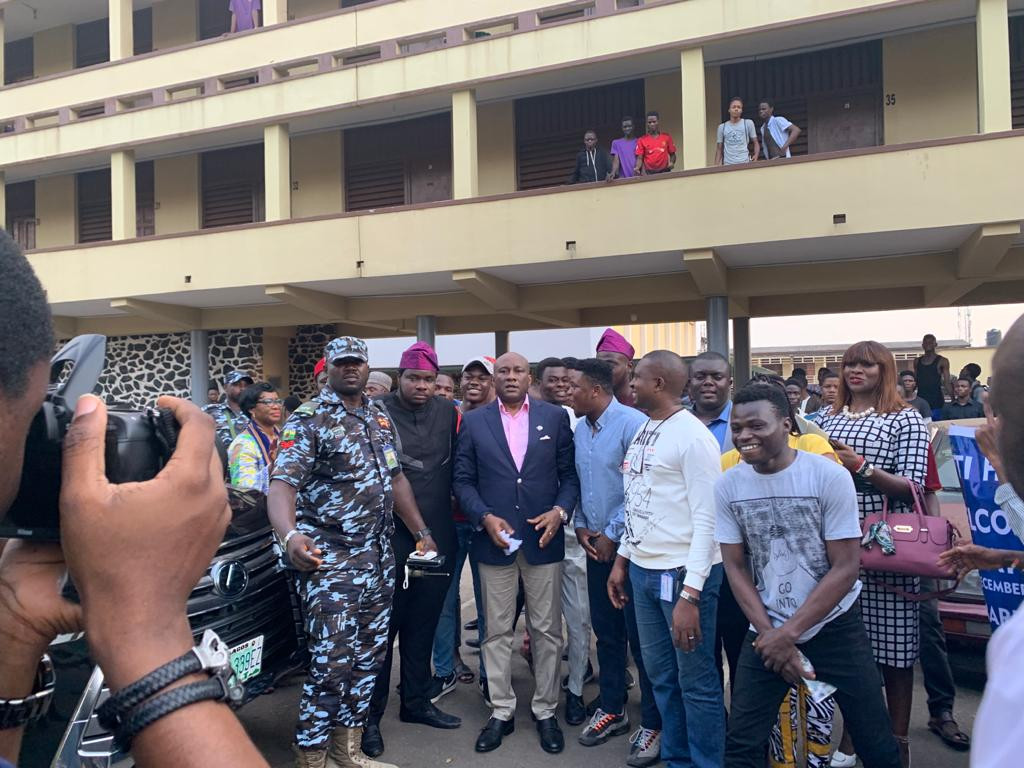 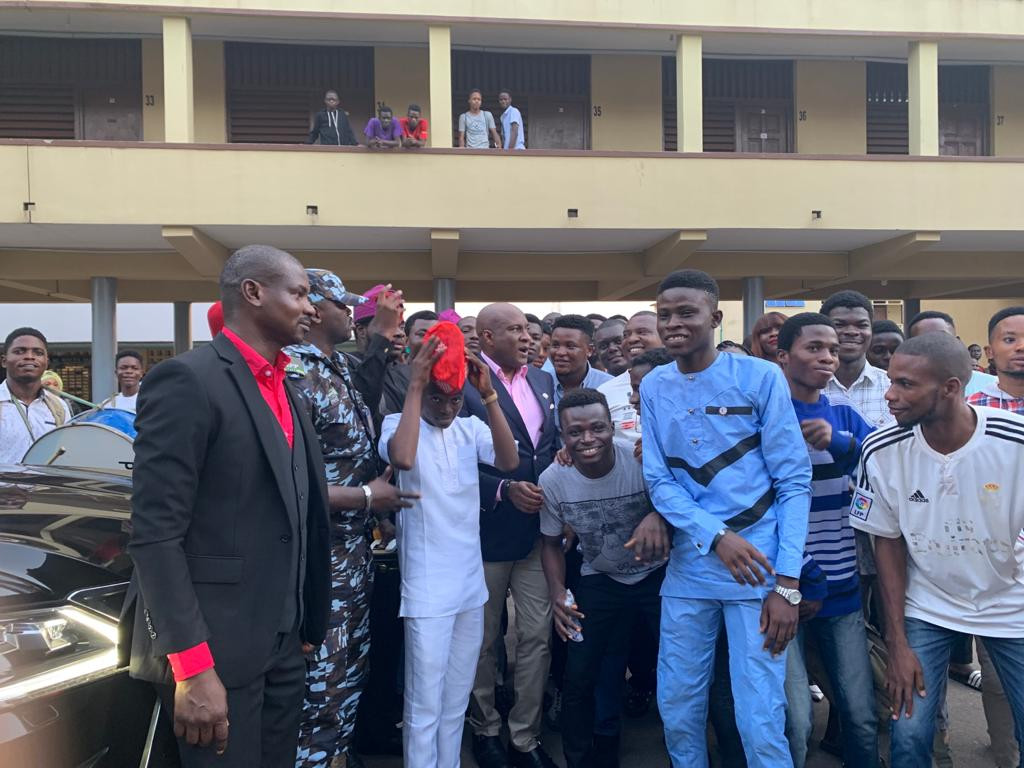 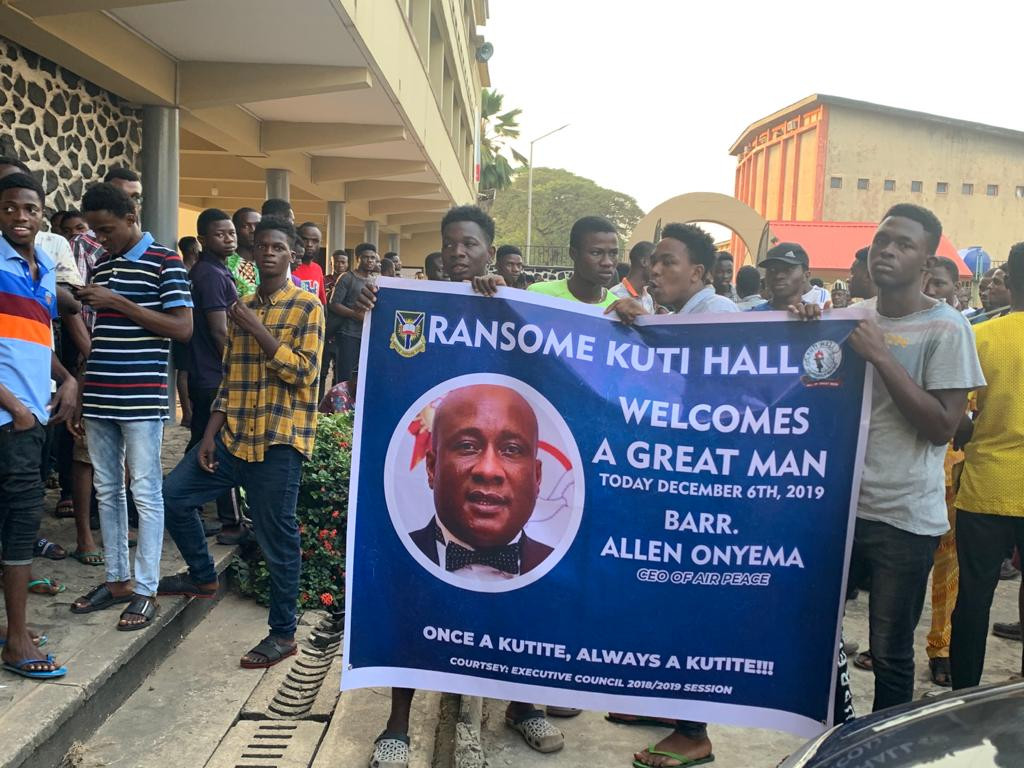 Daughter Cries Out After Her Mother Snatched Her Husband,Had A Child For Him