A Bayelsa state born Nigerian lady has taken to social media to publicly declare that she supports polygamy and willing to be a second wife.

According to the lady identified as Sagbama-Owei Peremobo-ere Queen on Facebook, it is better to be a second wife to the right person than be a first wife to the wrong person.

Taking to her Facebook page on Sunday, September 19th, she wrote, “Being a second wife to the right person is better than being a first wife to the wrong person. I move”.

When one of her followers asked if she has agreed to be a second wife she replied in the affirmative, while noting that all that matters to her is her peace of mind. 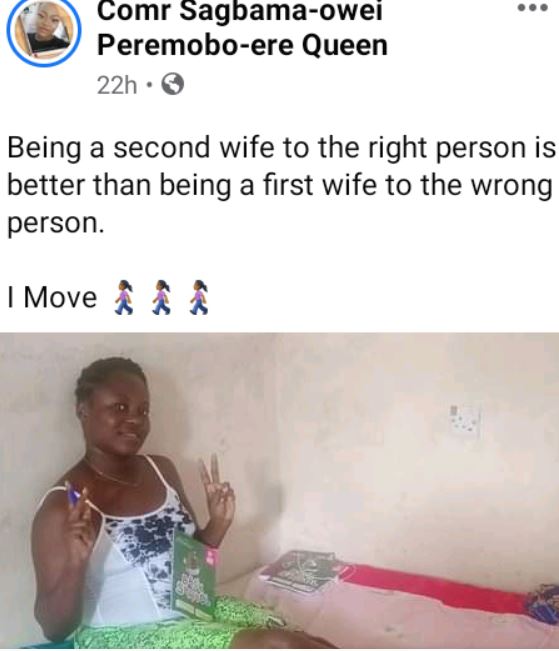 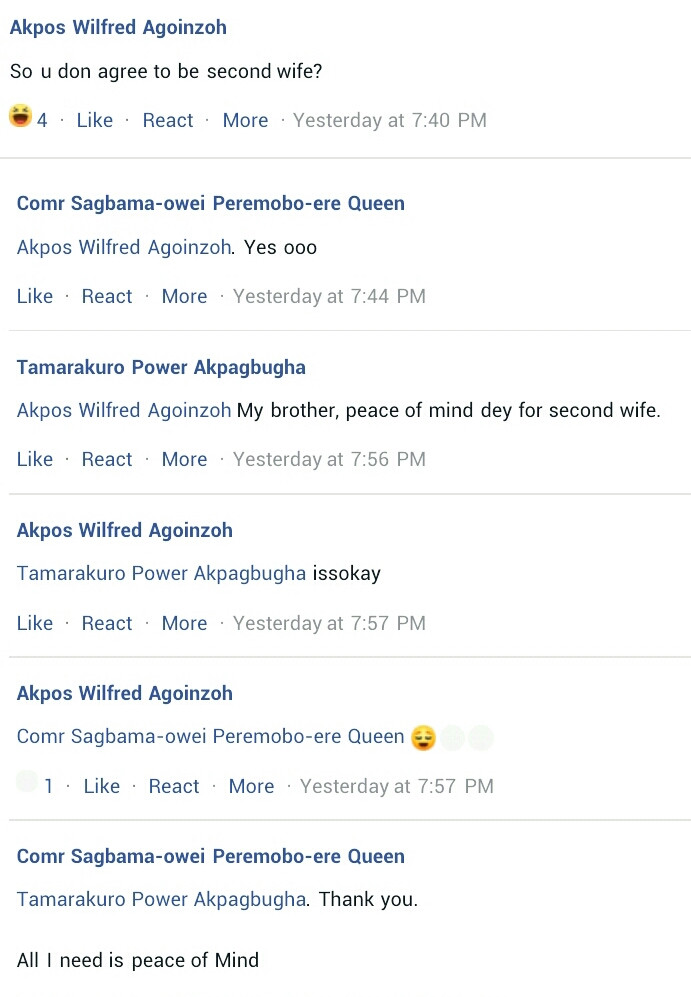 READ ALSO; ”I Felt Dizziness Because I Was Dehydrated”- EFCC Boss Defends Himself Over Slumping During His Speech

In other news, Popular Nollywood director and filmmaker, Ugezu Ugezu is of the opinion that ‘fate’ plays an important role in people’s marriages.

Ugezu in a post he shared on Instagram averred that some people’s fate has ruled that they will only be happy in marriage as a second, third or fourth wife.

READ ALSO; ”He Is A Fake And A Traitor, The Judas Of Oduduwa”-Sheikh Gumi RIPS Femi Fani-Kayode Over Defection To AP

According to him, some men will never enjoy marital bliss unless they are married to widows or divorced women, as that’s what has been destined for them.

He urged people to ensure they find out what they are destined for before going into marriage.

Strange : Man narrates how a family friend who died three years ago asked for his assistance

FALLING IN LOVE: Couple Suffer Embarrassing Fall As They Dance At Their Wedding TReception (WATCH)

Man 26,Kills His Father 64 ,For Offering Him A Chicken Head For Meal In Ondo

Police In Rivers Blame IPOB On The Attack On Their Stations...