Nigeria’s former Minister of Aviation,Femi Fani-Kayode,has continued his attack on the person and office of Vice President Yemi Osinbajo.

In a new article posted on his Facebook page today, Fani-Kayode shared Osinbajo’s photo and described the Vice President as a political errand boy. Read what he wrote below

1. His helicopter crashed but instead of him to proceed to a hospital his boss asked him to continue sharing trader money.

2. A. Senior Advocate of Nigeria and Professor of Law, yet under him lawlessness is practiced: he deputies for a fellow who has no proof of both primary and secondary education.

3. They took a Bill to the United Kingdom for your boss to sign and publicised it to further humiliate you.

4. As an ERRAND boy, your boss sent a junior Minister to represent him in an event that you were present.

5. A real ERRAND boy… They have removed all your aides from Aso Villa to a rented apartment in Maitama.

6. ERRAND boy, you went and knelt before Abba Kyari to stop the criminal investigation against you.

7. We told you this would happen but you refused to listen. Today, your two bosses, Tinubu and Buhari, are against you.

8. As for your Pastorship, well, we don’t know again.

9. Sorry! With this latest humiliation of taking a document to an ailing man without recourse to you, it serves as a confirmation that you are now a certified ERRAND boy.

10. The latest is that your boss has now sacked 36 of your aides in your office. Are you waiting for them to lock you out of Aguda House before you resign and go back home to Ikenne?

11. We don’t pity you. You opted for it. While he’s in the United Kingdom he sent you to his village Daura to attend the turbaning/coronation of an unknown Chief. So sad! We pray you receive sense. 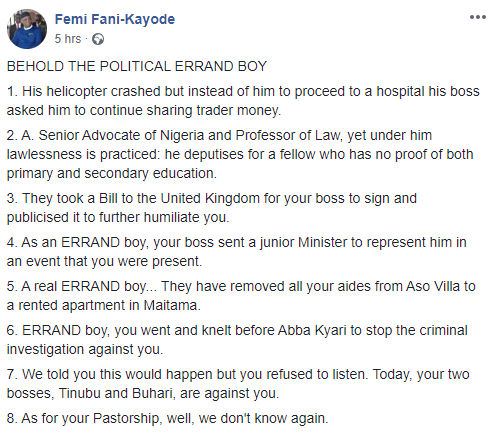 Rear Specie of Gorillas With Their Babies Captured On Camera (Photos)

Olusegun Adeniyi Chairman of THISDAY Editorial Board, Reveals Why Magu Was Suspended

Doctors Operated and Finds 122 Nails in a Man’s Stomach