French Ultra premium Vodka brand, Ciroc has confirmed Tacha’s alleged deal with them. The news has generated a lot of controversies on social media since she shared the Instagram photo of herself flaunting a Ciroc drink, with her name customized on it.

Her partnership with Ciroc has caused serious heated arguments and social media users have divided understanding about the customized Ciroc vodka.

Some believe she lied, claiming she only ordered for a customized drink while others argue that she signed a deal with Ciroc brand.

In a new development on the story, of Ciroc have confirmed that they signed a partnership deal with Tacha.

The brand revealed this in a response to one of their Instagram follower that took to the comment section of one of the brand’s post to confirm the authenticity of the partnership.

Replying to the person, the brand confirmed the deal. 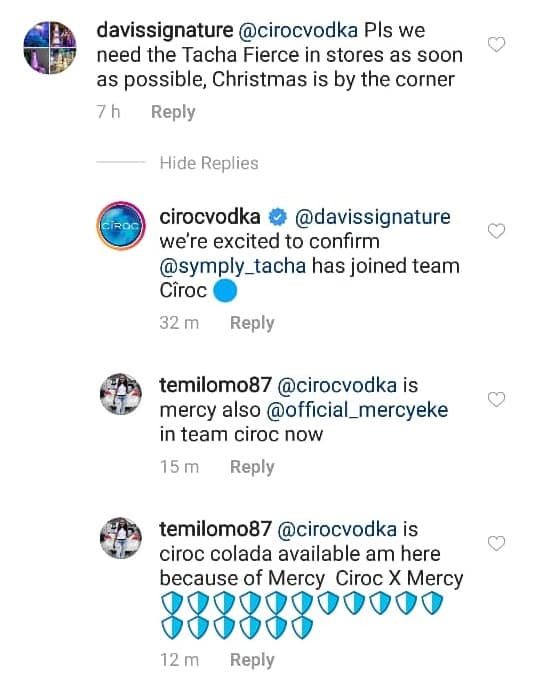 #BBNaija: Nengi reveals to Laycon why she refused to accept Ozo’s proposal

Nengi broke down in tears after Ozo exited the BBN house

#BBNaija: Ozo evicted from the house

#Bbnaija Lockdown: TrikyTee Has Been Evicted From The #BBNaija House

”Ozo Will Be Good As A Son In-law, I Will Appreciate Him” – AY Comedian Reveals

Check out these beautiful red carpet photos from the 2020 Golden...