Nigeria’s controversial and self-acclaimed journalist, Kemi Olunloyo has taken a swipe at Davido’s Chioma following reports of the DMW boss welcoming a fourth child with another lady.

Although, Davido is yet to speak up on the issue, however, Nigerians have taken to social media to react.

Kemi Olunloyo in her statement stated that Chioma will only remain Davido’s lover and nothing more. She also slammed Chioma for giving birth out of wedlock.

She wrote via her Twitter handle, “Chioma my lover~~Assurance by @davido Chioma dear, that’s all you’re going to be. Davido’s lover. Very DAFT Igbo girl. In a land where they don’t have kids out of wedlock. January tweet. Shebi I’m a Prophet or fake news carrier.” 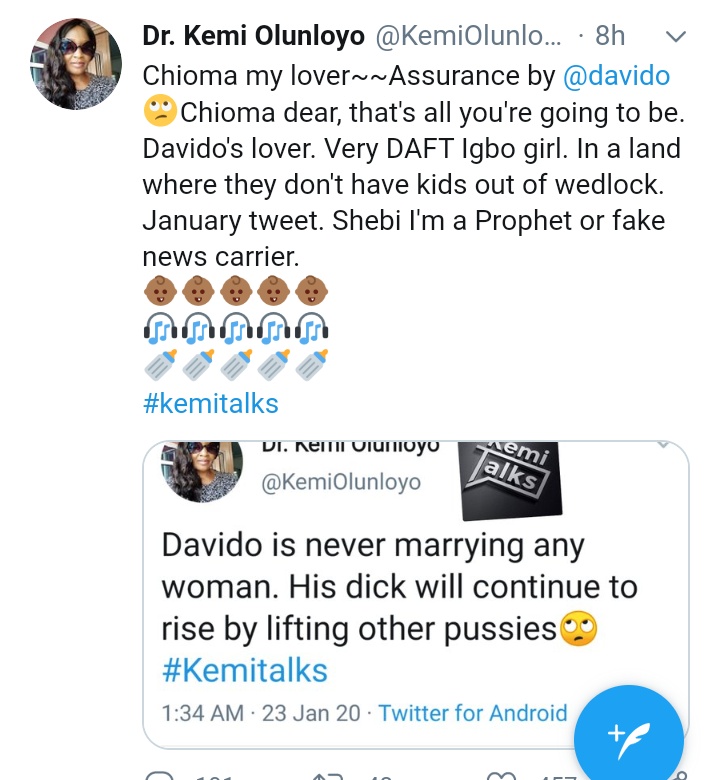 Kemi is known for always criticizing anything that has to do with Davido.

Nigerian Pro-Basketball Player , Michael Ojo Dies at 27 After Suffering a Heart Attack During Training in Serbia

Ex-Destiny’s Child Singer Farrah Franklin, “I’m Down for a Reunion, Too...