It was an embarrassing moment for Inkosi Xolile Ndevu, a member of the South Africa’s National House of Traditional Leaders, after his wife accidentally appeared stark naked during a virtual parliamentary meeting. 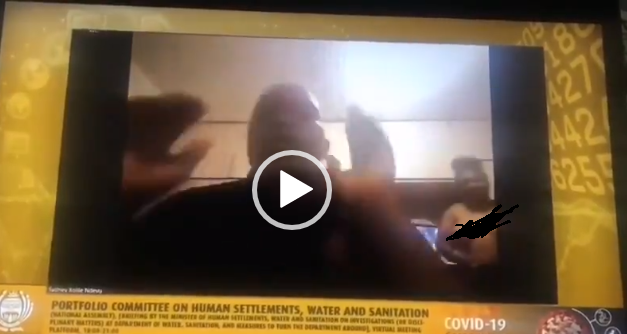 He was busy explaining how the Eastern Cape province was working with medical doctors on the matter of initiate deaths, when his wife walked into the room stark naked, oblivious that she was appearing on national television.

“Inkosi, the person behind you is not properly dressed, we are seeing everything, yho! This is very disturbing what we are seeing. And this is not the first time this is happening, every time we see you, we see these unholy pictures. You are on live television.”

Embarrassed, Inkosi Ndevu apologised for the incident explaining that he was unaware that his wife had been in the background.

“I’m very sorry. I was focusing on the camera and not behind me. I’m so embarrassed, chair.” He said.

Following the incident the South Africa’s National House of Traditional Leaders, through its chairman Ikosi Sipho Mahlangu have issued an apology to the public.

Update: “I would have also been a victim” – Another Lady shares her Facebook chat with Frank Uduak ; He tried to invite her...