Nigerian singer, Reekado Banks, may be the latest celebrity causing havoc on and hopefully not off social media.

The MAVIN act, took to IG to share a snippet of his latest project, (a melodious tune by the way) and instead of igniting the fire of thirsty showers of praises, the snippet instead caused some hot words to be exchanged between his fans and non-fans alike.

A bone of contention: Reekado, in the video, could be steering the wheel of his car with one hand while the other held up a red cup, a cup which he graciously mentioned did not hold within it any alcoholic content but of course many chose not to read his caption and instead slammed the singer.

However, with each insult from non-fans, explosive clap backs from fans rang from every corner as Reekado’s fans made it very clear no one could come on his page to disrespect him.

Read the exchanges below: 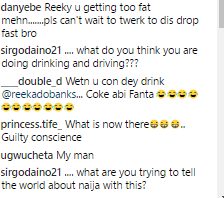 Patoranking hangs out with Busta Ryhmes(Video)

Angel Bishop Daniel Obinim Claimed He Rolled Out The Stone From...