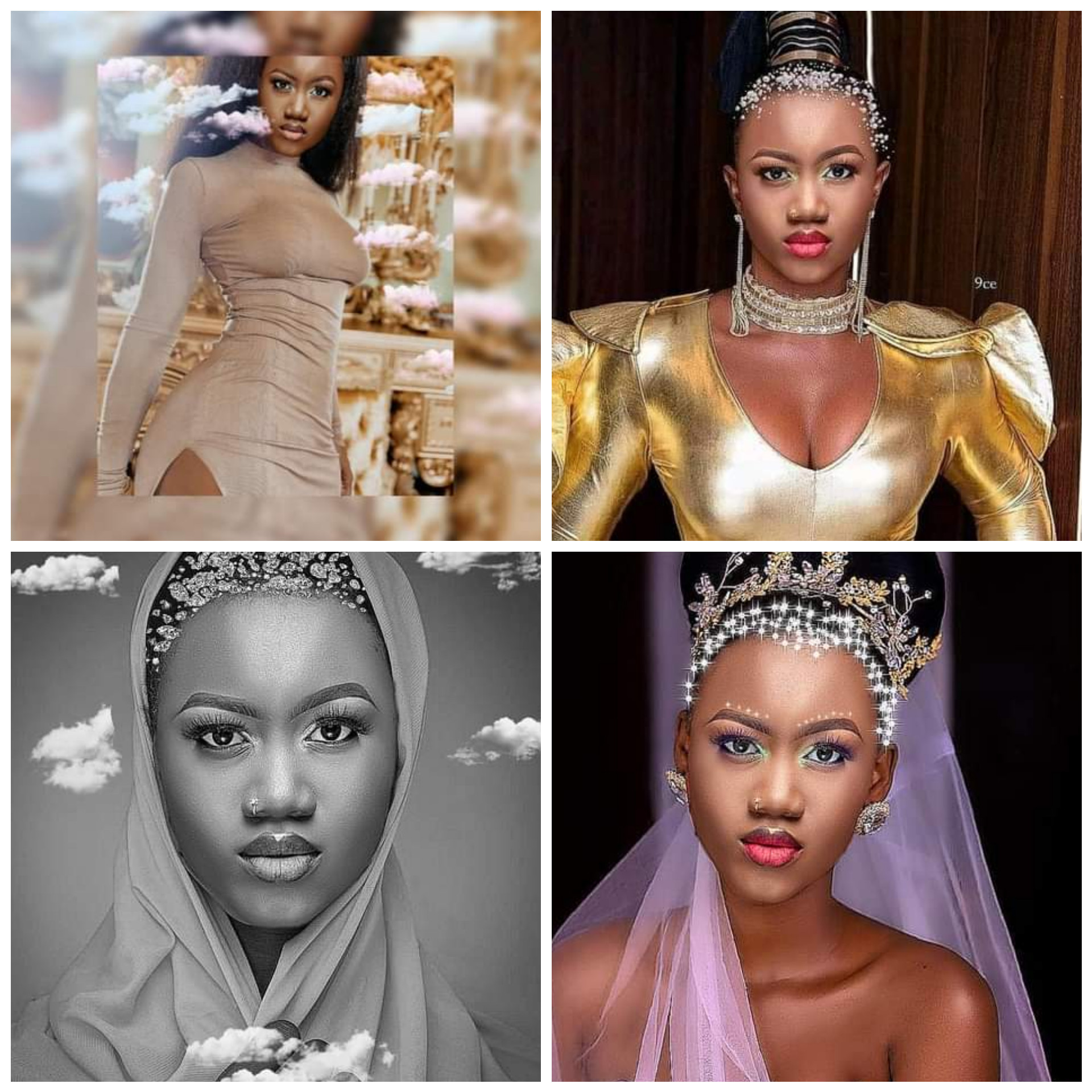 Nigerian human rights activist, Comrade Israel Joe, on Wednesday, January 12, 2022, narrated how he recently found out about the death of a University of Port Harcourt student he used to counsel.

It was gathered that the young model identified as Vera Grand, died in a motor accident last October, few days after her birthday.

According to Comrade Joe, during their first meeting in 2019 at Effurun, Delta State, the deceased told him that she had been struggling with thoughts of her death.

”Rest on dearest.   “Comrade I just think I will die” Vera Grand.

I met this beautiful lady towards the end of 2019. She walked close to and called loudly “Comrade Joe” as I stood close to the customer care upstairs at GT Bank Airport Road Effurun.

She told me she has been my follower on Facebook after I posted a story of a 13 year old girl who was drowned in a bucket of water and raped by her step father at Jakpa Road.

According to Vera, none of my posts whether good or bad pass her phone screen without liking or commenting on it which I noticed over time.

We moved from becoming virtual to actual friends. We exchanged contact and off course interact most times on phone. When she told me about a thought which always come to her that she would die.

I rebuked her and told her that thought is nothing but a demonic voice trying to reset her mindset into a negative reality. I advised her to also talk to her pastor about it while I proffered psychological therapy as well.

She struggled with that thought until we met according to what she told me. I gave her a book about the mind authored by Napoleon Hills. We communicated at least twice monthly. I remembered the last time I saw Vera about three weeks to her birthday in October last year 2021

She met me at Shell Golf Club Ogunu, Warri where I went to play table tennis and I interrogated her about her school, friends and family.

She told me being a student of UNIPORT must keep one busy but we do not talk often anymore as that thinking is trying to return. I just told her to forgive my being extremely busy with societal matters but promised to keep checking on her.

I told Vera that the mind is a battle field and whatever sunk into someone’s subconscious if not filtered and checked crystalizes into reality. “Never be scared of anything Vera. Nothing happens to one unless one looses the battle of the mind. Are you a chicken that fears anything and everything? You had better be a lion that turns from nothing dear.”

I again told her to pray against such thoughts. I woke up and discovered that faithful day 8th October barely three months ago was her birthday. I called and also sent wishes to her. We chatted on WhatsApp same day. The last word she told me was an assurance of loyalty. “Whatever Happens I still remain your loyal fan Mr. Activist”. I told her to ensure she sends my cake across and we laughed over it.

I was worried when I tried to reach Vera in December knowing that we haven’t spoken after her birthday. Activities upon activities, her number was switch off and I became nervous only to contact her friend this week who told me Vera died few days after her birthday. She had a motor a.c.c.i.d.e.n.t and couldn’t survived it on the spot.

This is a huge shock to me. You finally lost the battle but I know you have entered a golden place of  peace and rest from the disturbances of negative voices. You were a rare breed and special friend indeed my dear. You were full of fun and I trust your beautiful soul find eternal rest. Your friends and family will miss you. Continue to rest dearest. 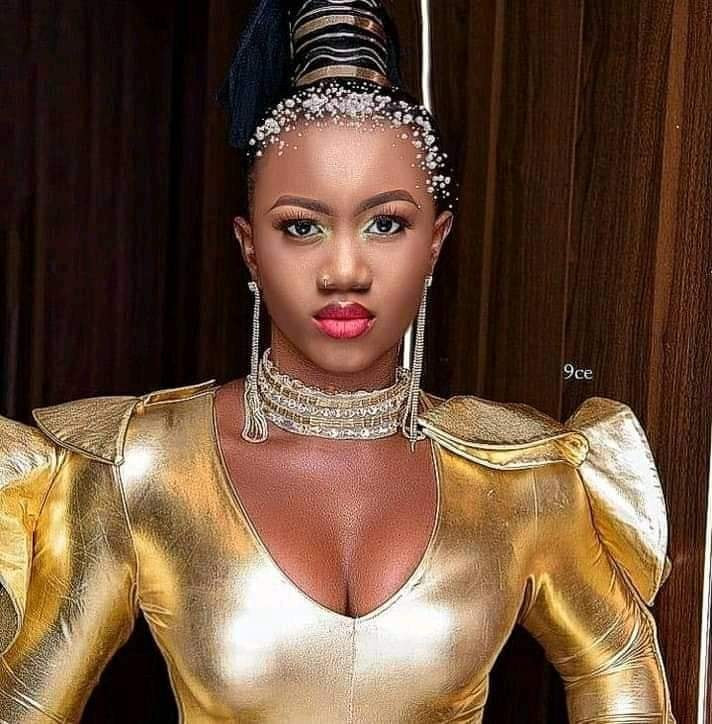 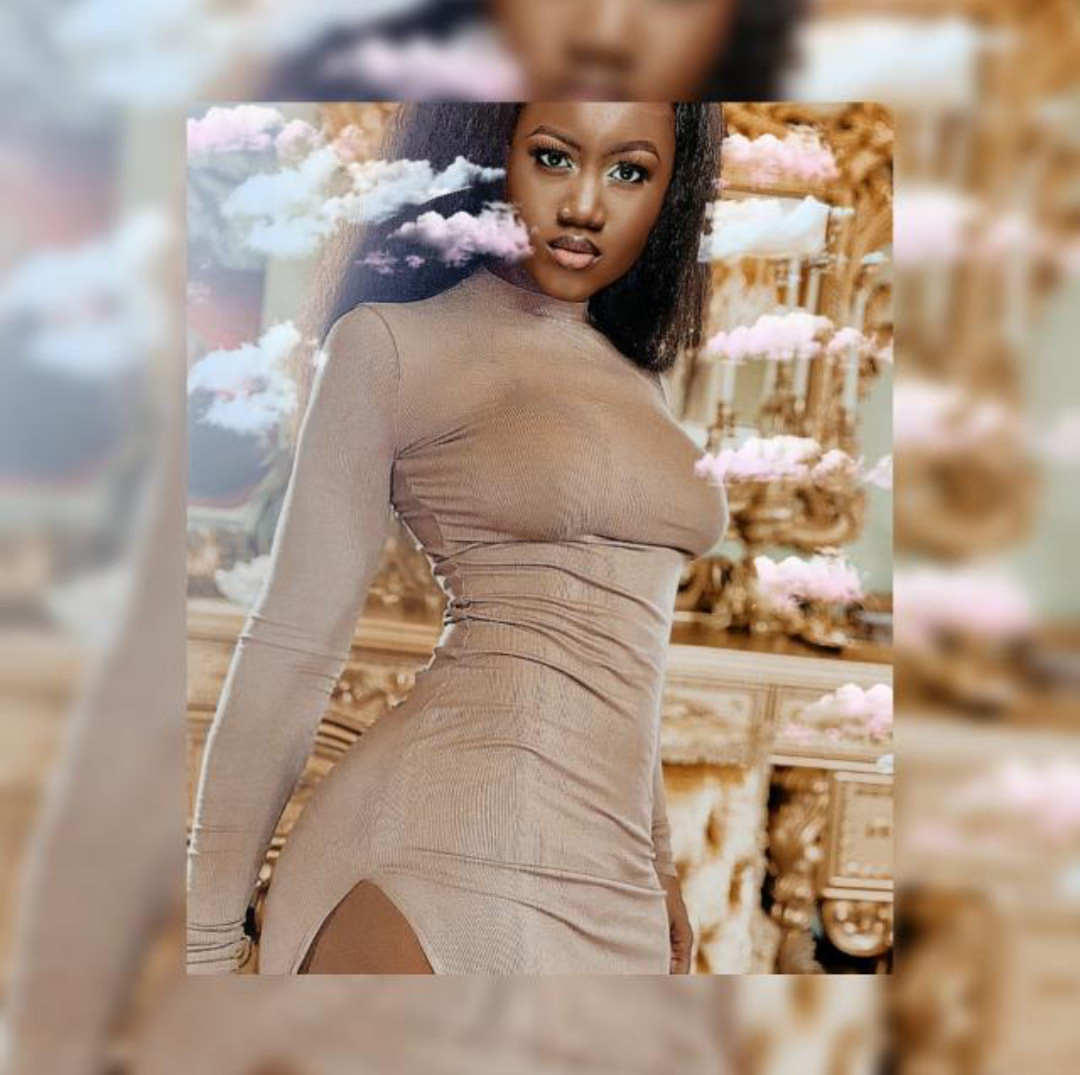 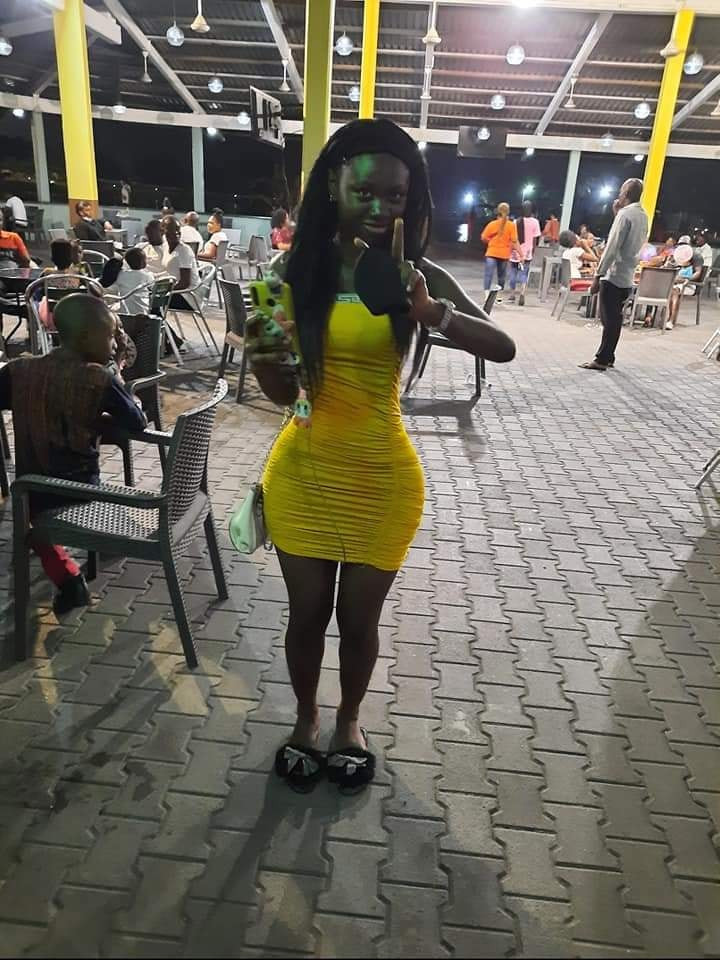 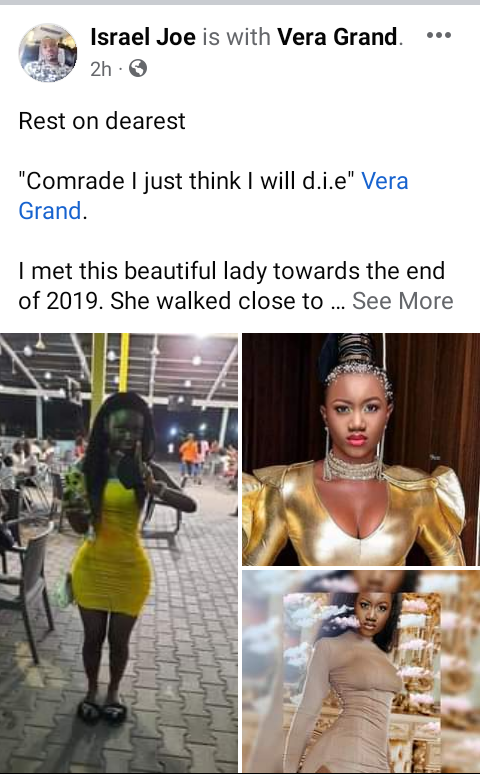 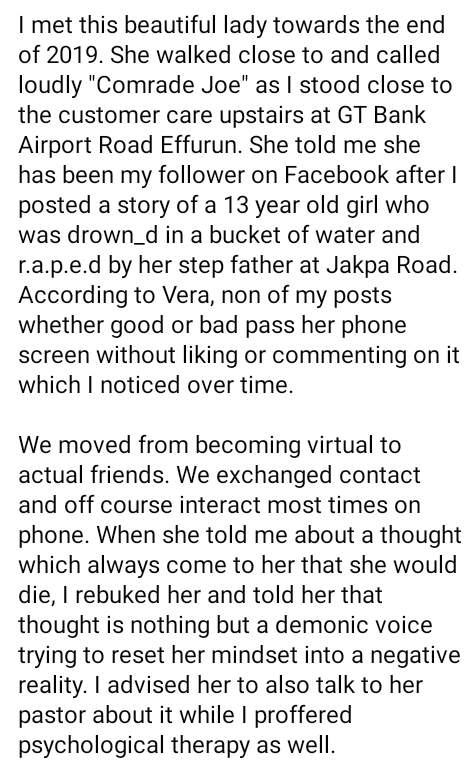 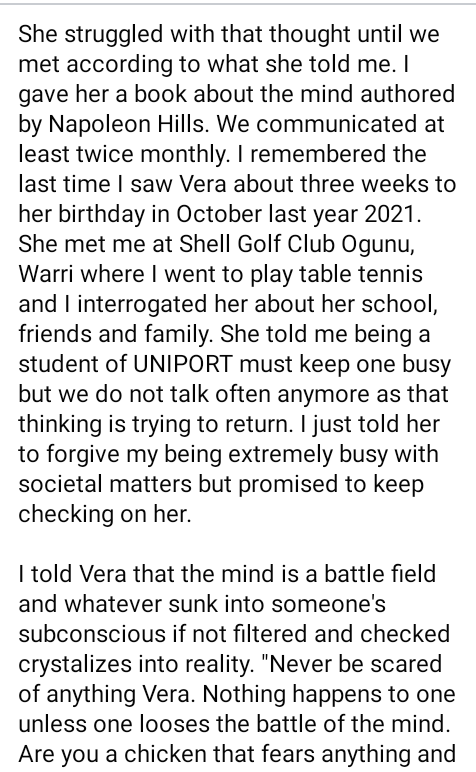 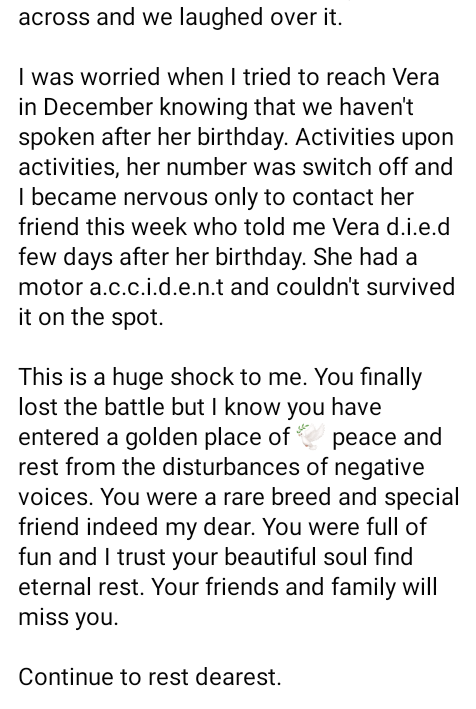 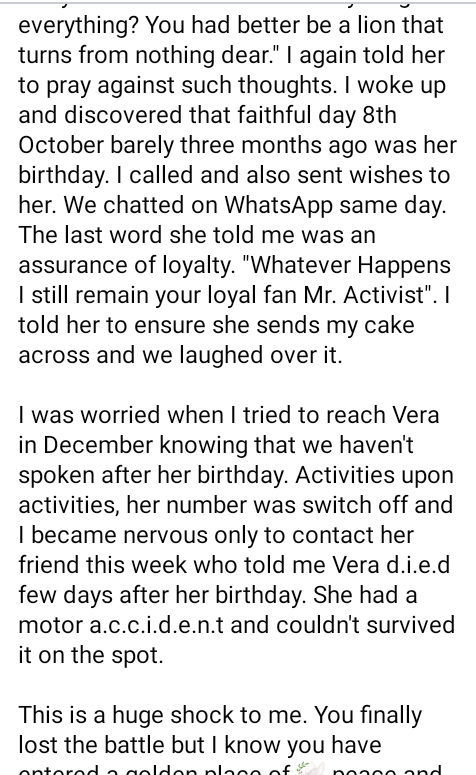 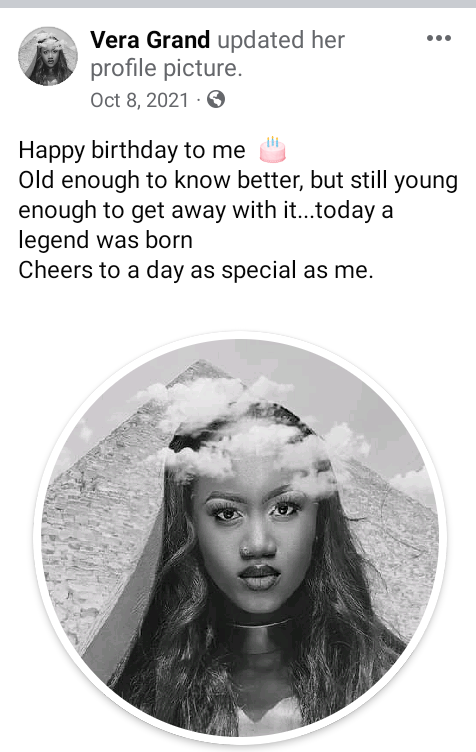 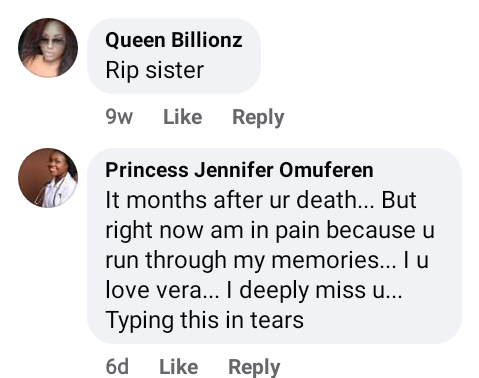 Abians should be grateful that I’ve started constructing it, it’s not their business because I decided on my own to build it – Gov....