Shakarasquare
Home Entertainment Kanye West And His Choir Performs at Harris County Jail in Houston
Share on Facebook
Tweet on Twitter
Kanye West brought the soulful sounds of his Sunday Service choir to prisoners in Texas just days before his face-to-face with Joel Osteen.

Law enforcement sources tell us Kanye reached out on Wednesday to set the whole thing up … the jail has a very popular religious program. We’re told Kanye brought about 100 choir and band members. He performed two separate shows — one for male inmates and one for females — each crowd was couple hundred people.

Law enforcement sources tell us Kanye and his choir showed up at the Harris County Jail in Houston Friday morning to put on a show. We’re told the whole thing was a surprise to almost everyone, with only a few who helped to put it together. 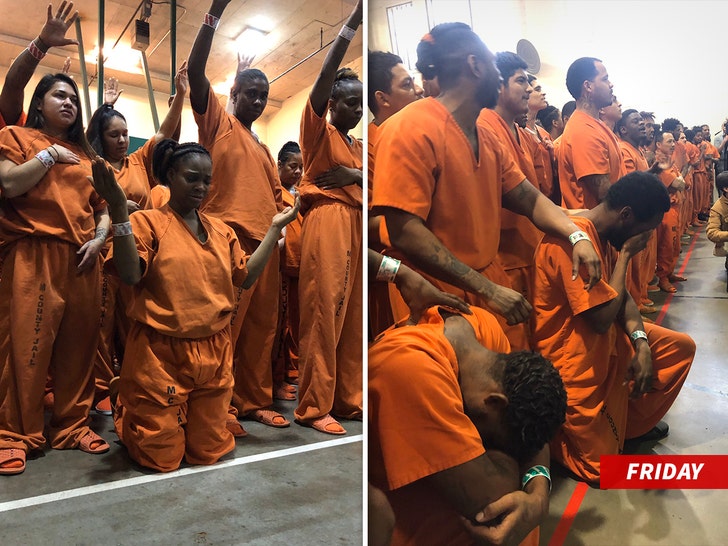 Our sources say Kanye and the team stayed for a couple of hours and performed for a select group of prisoners and staff members.
TMZ broke the story … Kanye will make an appearance and chat with Joel Osteen Sunday at Osteen’s Lakewood Church service. Sunday night, Kanye and his Sunday Service choir will take the stage at Lakewood for a performance of their own
Osteen’s team has been working feverishly behind the scenes, teaming up with Ticketmaster to make sure everyone — Kanye fans and churchgoers alike — get a chance to see the performance.

‘African Giant’ Gets Certified Silver In The UK

#BBNaija: Dorathy reveals why she stopped being friends with Lucy

The village headmaster actor dies at 83

Police arrest pastor for allegedly raping member of his church