Engagement: When you think that the social media is over,another one comes up like a flash.Lol!

A Nigerian man has taken to twitter to reveal how his friend’s fiancée sold the original engagement ring given to her by man to replace with a way cheaper one.

According to one Victor Israel on Twitter, his friend has got his girlfriend arrested after realising she had sold the engagement ring he got for her that’s worth the sum of N150,000 to purchase another worth 15,000. See his tweet below:

My friend recently proposed to his Girlfriend. With a Gold ring worth about 130k. Yesterday he got her arrested because she sold the Ring and replaced it with a cheaper Ring of 15k. We are still settling the fight sha. 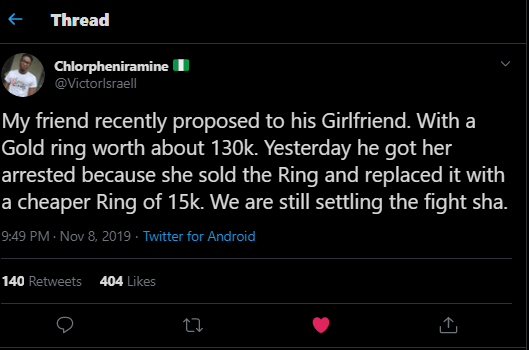 VIDEO: Nigerian man falls to his death from 12th floor of his Indonesian apartment

”He didn’t beg for his life”.Man write a heartbreaking tribute to ROPVIL DACHIYA who was killed by Boko haram.

‘Please Forgive Buhari For He Forgot Where He Kept His Certificate’-Lai...