Following the report by a lady, who exposed a man who attempted to sell a Nigerian lady in Lebanon on Facebook for $1000 that went viral today, the Federal Government has finally reacted.

According to the statement released by Abike Dabiri, the Chairman of Nigerians in Diaspora Commission,  she disclosed that the Nigerian mission in Lebanon has since reported to the host authorities.

“A man hunt is on for the man and all out search for the young girl..Let’s keep her in our prayers,” she added. 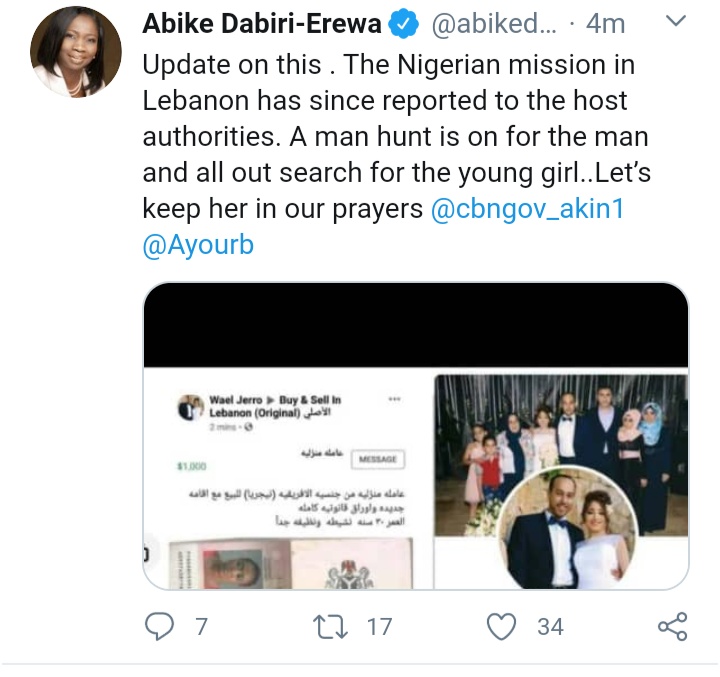 According to the report, the Lebanese man identified as Wael Jerro had taken to a Facebook Marketplace group to post advert of the lady, whom he claimed was his maid and he intends to dispose her for $1000.

28 year old girl arrested for calling ex-boyfriend more than 27,000 times after break up

Please save my marriage, my husband is still in love with dead woman – Wife cries out

Graphic Photos Shows A 14 Year-Old Girl Savagely Tortured By Her Deaconess Madam Who Set Her V*gina Alight After Forcing Hot Pepper Inside..

A 3 Story Building Collapses Killing One,Leaving Many Injured In Lagos

Lady Calls Out Nigerian Boy Who Raped 4 Girls And Brags...