The Nigerian Soldier identified as Corporal, Omoh F, of the 9 Brigade, has been arrested by the Army after he was caught on video flogging a woman at an ATM branch in Oshodi, Lagos. 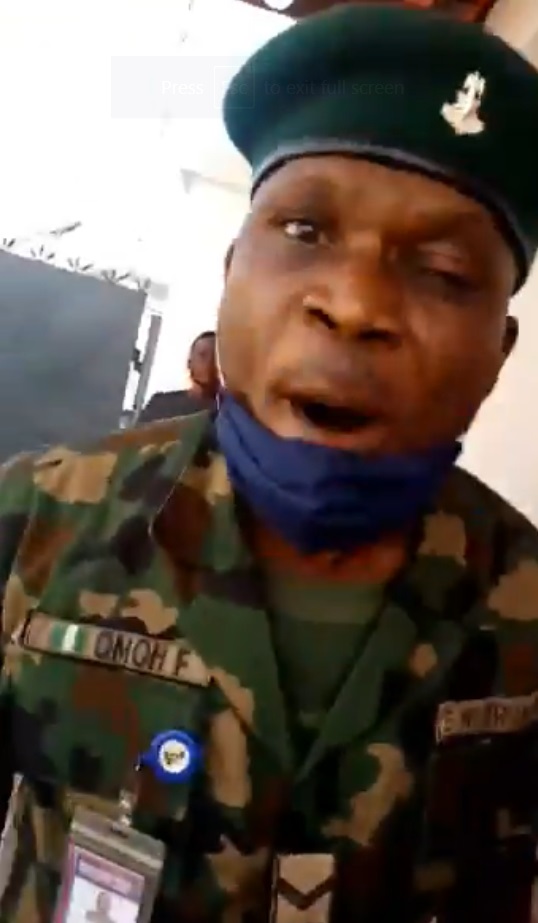 The lady who was flogged, Ada-Oma had taken to her social media page to reveal how she was beaten with a belt by a soldier, who was later identified as Corporal Omoh.

Ada-Oma alleged that the soldier had tried to jump an ATM queue but she challenged him.

Ada Oma tweeted, “I was just assaulted by an army official this morning 26/10/2020 at the ATM stand of UBA at their Oshodi branch. I am still shaking and crying as I write this because I have never felt this way in my entire life. I’m also scared writing this because he threatened me.

“He flared up as you will see in the video below, and before I knew what happened he brought out his belt and hit me.

“This happened at UBA branch in Oshodi and the security men were there. I literally cried my way to the office. I never insulted him. He threatened to make me bleed in my own country because I asked if he was in the queue. I want justice.”

Spokesman for the 9 Brigade, Major Olaniyi Osoba, confirmed the arrest to The PUNCH.

“I can confirm to you that he has been detained and investigations are ongoing,” Osoba said

Girl 17,Who Passed With 7A’s In WAEC Dies Of Leg Pain (Photos)

Pastor on a deliverance mission dies in his sleep in Anambra