As the two love birds ,Cardi B and Offset are celebrating their second wedding anniversary after tying the nuptial knots in a secret ceremony in September 2017,loving husband Offset wrote a wonderful message in appreciation of her love

Recall that the 26-year-old ‘Bodak Yellow’ rapper and her husband who is a Migos member, went public with news of their marriage 9 months after it was contracted.

Sharing a loved up photo with Offset as they marked their second wedding anniversary, Cardi B wrote;

“Happy marriage anniversary hubby. We keep learning and growing. That’s what marriage about.” 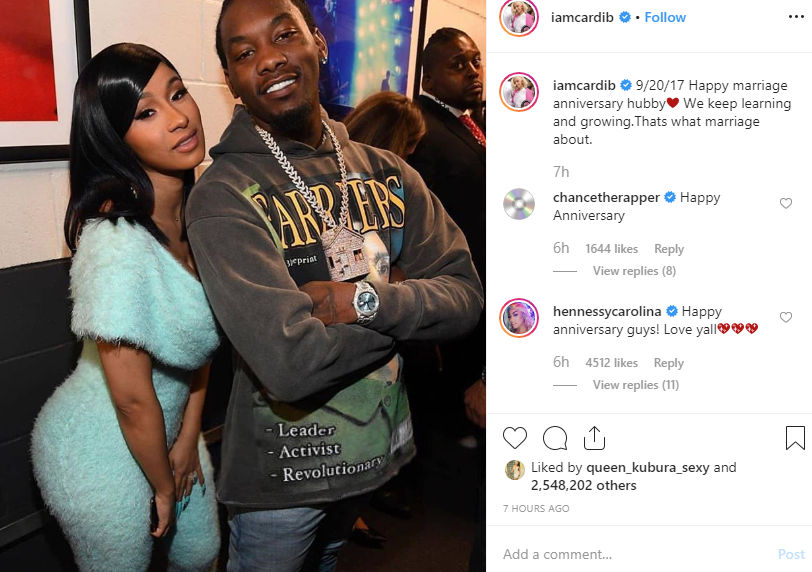 Sharing a video which captured different loved up moments including their on-stage engagement, baby shower and labor scenes, Offset also penned down a heartfelt wedding anniversary message to his wife Cardi B.

He wrote “Today is our anniversary nobody believed it was real. We got married without nobody knowing because it was only between us and God! Now we have beautiful Kulture and a big family. I love you 4ever and after life.”

The couple started dating few months into 2017. They decided to keep their marriage a secret with Cardi B saying she wanted to keep the day “for myself”. Offset and Cardi B’s romance has not been a smooth-run as they went separate ways in 2018 amid reports of the Migos rapper being unfaithful. They later reconciled after he begged for forgiveness in a video shared on Instagram.