Nigerian singer Peruzzi has just acquired a brand new mansion in a choice area of Lagos. The DMW act took to his Instagram page to share beautiful videos of his new apartment that had a handful of the Davido Music Worldwide crew members.

This development is coming after the artist was dragged by his former record label boss King Patrick who alleged Peruzzi joined DMW while he was still,a signed artist under him. The matter lingered on and brewed up ugly allegations of Peruzzi pimping up Chioma to Davido

Check out videos of the beautiful mansion below:

His label boss, Davido also congratulated the Huncho Vibes on his new acquisition: 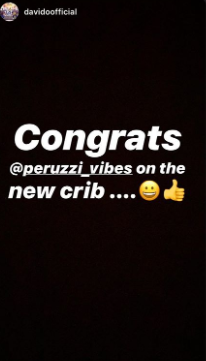 Thanks For Keeping Her In House – Dorathy’s Mum

Helen Paul, Reportedly Set To Become A Professor In The United States Of America

Reekado Banks Makes A Great Come Back On Social Media ,Announces The Release Of A New Song