A woman gave birth to a baby with two heads, on Tuesday at Med-in specialist hospital, Osogbo street, Lagos,  through an elective Caesarean

Various scans the woman underwent in the course of the pregnancy, indicated that she was having a twins.

The baby was resuscitated and transferred to the Lagos University Teaching Hospital (LUTH) for advance care. According to one of the nurses who was in the delivery room, they had prepared two cots for each of the twins but were shocked when they saw that they were conjoined.

“As I speak to you, the mother doesn’t know the condition of the babies. She still believes and expects to carry her twins. We haven’t told her yet. Only her husband was brought into the theatre to see his children and he was the one who went with the doctors to LUTH,” said the nurse. 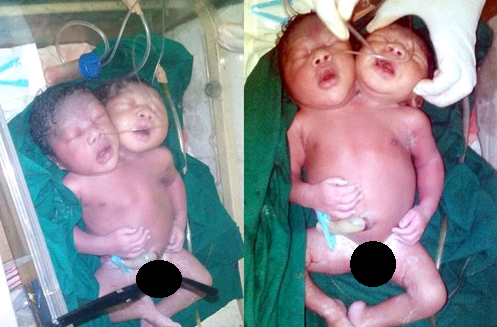 The condition is known as Parapagus. It is a rare form of partial twinning where there are two heads and two necks side by side on one torso. Doctors say they cannot be separated since they have only one pair of arms and one pair of legs and one heart.

This disorder is different from conjoined twins as the baby has only one set of internal organs. The extremely rare case is thought to be brought on during the early stages of pregnancy as a result of genetic mutation.

Med-In Hospital Manager, Dare Moses, said the baby was taken to LUTH so that tests can be conducted to ascertain if they share also vital organs like hearts and lungs. The Ministry of Health has been notified of the development.