Inter Milan’s Romelu Lukaku has been named as the best overall MVP of Serie A after he helped Inter Milan win the league title for the first time in 11 years.

The Belgium international, 28, scored 30 goals across Serie A, the UEFA Champions League, and the Coppa Italia with 11 more assists as Antonio Conte’s men ended Juventus’ stranglehold on the domestic scene.

READ ALSO: Wonders!: Video Of Two Men Throwing A Dead COVID Patient Into A River In India Breaks The Internet 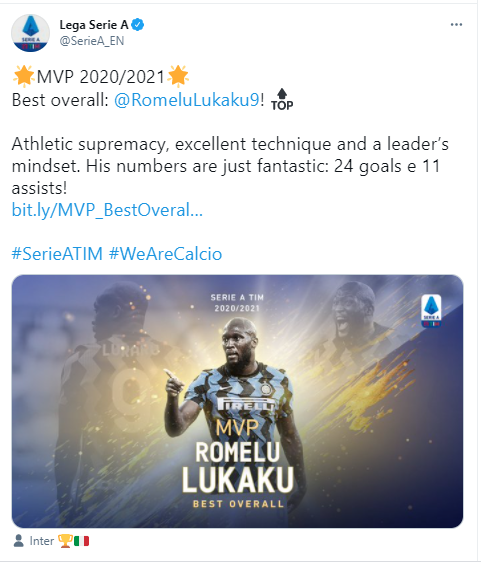 He also came second after Cristiano Ronaldo as the best forward in the Italian top flight.

AC goalkeeper. Gianluigi Donnarumma was crowned best goalkeeper after he kept 14 clean sheets for his, while the top defender award went to Atalanta’s Cristian Romero.

READ ALSO; Actor Nino B Gets Presidential Reception By Popular Ikorodu Bois As He Visits His Hometown (Video)