Controversial and most talked about Nigerian celebrity in last few weeks,Tonto Dikeh,has finally reacted after the Board of Trustee (BoT) of Actors Guild of Nigeria (AGN) threatened to sanction her over her failed marriage saga with her estranged husband, Olakunle Churchhill, which is currently the major topic online.

In her response, the actress called out the BoT chairman, Prince Ifeanyi Dike using the ‘F’ word, then she went on to say, ‘I hope this fastens your sanction from your board!!
Stupid fool you have not sanctioned the actresses going to dubia to open their mouths for old men to poop inside or the ones pushing drugs! Oga shove it up your Ass nigga. If only there was an EMOJI FOR WAKA’. 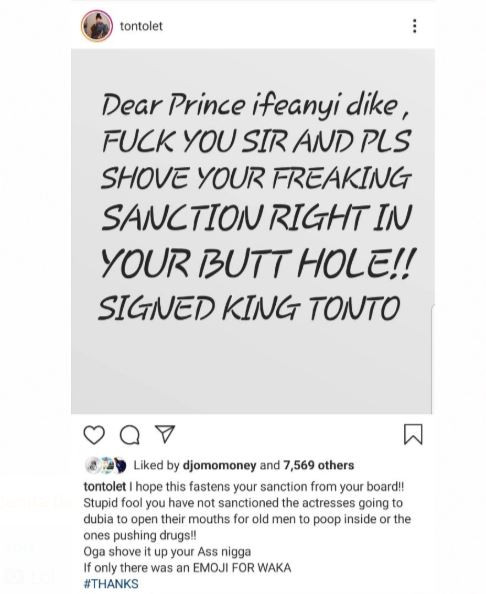 Manchester City’s Riyad Mahrez Attacked By Robbers,Lost Over £500,000 In Wrist-Watches And Cash