The catholic Vicar, Pope Francis has reportedly fallen sick just a day after he prayed for corona-virus sufferers in Italy, an event he was suppose to attend at a Rome basilica was hereby cancelled.

According to the UK Mirror, the pontiff prayed for corona-virus sufferers on Ash Wednesday, while mask free, and even took time to shake hands and kiss worshipers, including a child, in St Peter’s Square at the Vatican.

The publication also added the pope appeared to have a cold and spoke with a slightly hoarse voice at his general audience on Wednesday and coughed during an afternoon Ash Wednesday service in a Rome church. 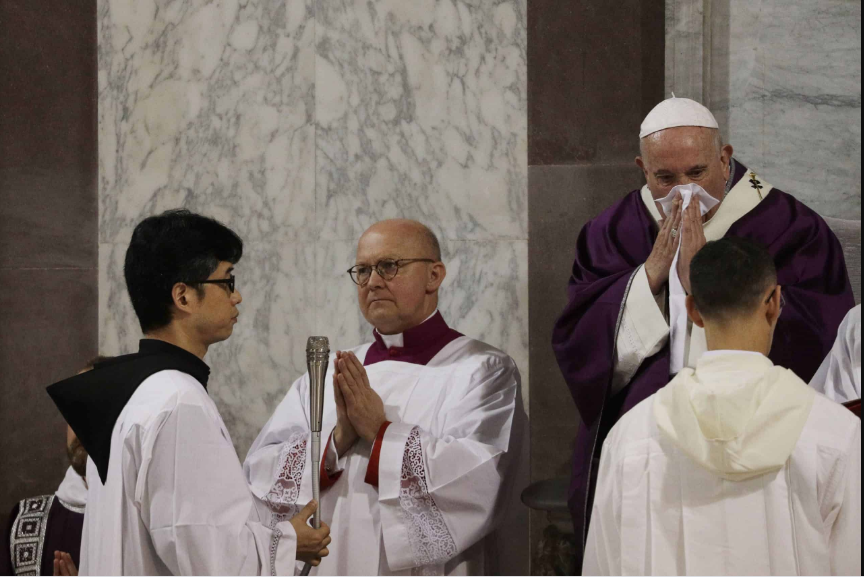 Speaking during the mass at St Peter’s Square, the Pope showed solidarity with corona-virus patients amid the alarming outbreak in Italy.

He said: “I wish, again, to express my closeness to those who are ill with corona-virus and to health-care workers who are caring for them.”

After falling ill, the Vatican said on Thursday that the Pope is carrying out the rest of his schedule in his residence,

“Because of a slight indisposition, he preferred to stay inside Santa Marta,” the Vatican said, referring to the guest house where the 83-year-old pontiff lives.

All other commitments will go ahead regularly,” spokesman Matteo Bruni said

In Italy, the northern regions of Lombardy and Veneto are locked down, following the report over 500 cases and 14 deaths from corona-virus, also known as Covid-19.

VIDEO: Oluwo of Iwo offers himself as a “sacrifice” to save the world from coronavirus