A wife has punished her husband’s mistress after catching them together in her house.

Upon catching them in the act, the wife made the woman say on camera that she’s a homewrecker who sleeps around with married men who have kids. She was then given a bucket and a rag and asked to mop the floor. She was also asked to wash the blanket which she and the woman’s husband had sex on.

“You want to be the woman of this house? Then do the chores as a wife. I want these blankets clean,” the wife said to her rival in the video. 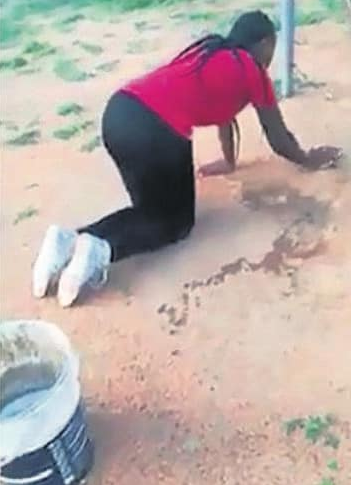 According to online reports, the incident took place in Pretoria, Tshwane, South Africa over the weekend and the video is now going viral after it was shared online.

Social media users have accused the wife of being a bully and asked her to attack her husband who vowed to be faithful to her, not the woman, for the extramarital affair.

New video shows moment three other officers held the legs of George Floyd during his arrest.

Pictures of Couple Who Fell to Their Death While Taking selfie...