Film director and producer, Lancelot Imasuen, and his wife, Osas, longed for a male child, but God blessed them with four daughters instead. Now, Lancelot says they have overcome the sentiment Africans attached to the male child. 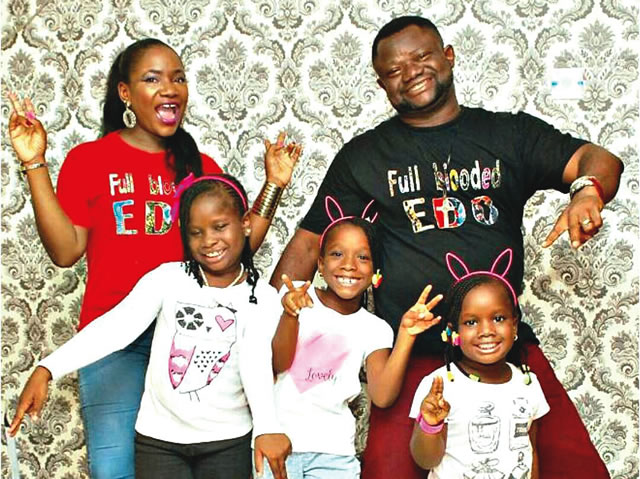 It’s been beautiful. We have had our ups and downs, it’s been exciting. It takes time for couples to understand each other. I just returned from a very long holiday with my family. When I looked at my wife and she looked at me, she said: “This is one of the best moments we have had together”. I told her that nothing has changed; it’s just that we understand ourselves more. Those things that used to cause friction between us, we understand ourselves better. In marriage, where there is misunderstanding, where every action is seen as “you deliberately did this to hurt me”, rather than it’s just an error. So, as you grow in marriage, you begin to understand that some things you used to quarrel about were just harmless errors that just happened. That’s what the timing has done for us. There has been less friction, less quarrel and less disagreement. We are more concerned now about raising the children, giving them good training and also be conscious of ourselves.

My wife is a treasure to me .Over the years, I have watched her perfect the art of understanding the kind of man she married. Each time she sees me, she’s very excited and, on my part, I try as much as possible to play my role as a husband. To be honest, my wife is working, and, sometimes, she sends money to me. And she takes care of the home front when I am not around.
This understanding came with time and the desire for both of us to make our marriage work. We have four beautiful girls. Yes, after the birth of our first daughter, we expected to have a baby boy, and a baby girl came again. We thought that the third child would be a boy, the baby turned out to be another girl. She was born the day I was marking one year remembrance of my late mother. It would have been a sorrowful day for me, but her coming changed the picture. That got me excited and we celebrated her birth instead of mourning. We stayed off children for six years, and said “okay, let’s try again”. And the fourth child is still a beautiful girl. God has His way of doing things. And I give Him all the glory for that.

Spending more time with my family :

I wouldn’t say so because I must be in three places every month. I must be in Benin-City to see how my baby, Benin Film Academy, is faring. I must also in Lagos to oversee activities in my office as well as Abuja, where my family is currently based. I am more conscious of how I share my time. Family to me is first, it’s sacrosanct. Give the attention that the family desires and let some other things be. And, of course, you need other things make the family fulfilled; you need to make money, pay school fees, pay house rent and take care of yourself.

What has changed about wife?

She’s more beautiful, more understanding. She’s now ‘grown up.’ I married a pretty girl who just graduated from the university, rounded off her NYSC and came straight into marriage. Now, I am seeing a woman emerging from that girl, as she grows in age and grapples with the responsibility of being a mother. She’s alone with the children, we don’t have a house help. Anytime I am around, they see the different me. I would go to the kitchen, clean up the children and everybody is excited. So, the girl I married is now a woman that I love, admire and adore.

I wouldn’t say marriage has humbled me, but I can tell you that family has humbled me. This is because suddenly I am an advocate for family. I produced a film and titled it, ‘Family Sacrosanct.’ I produced another film and titled it, ‘Family First.’ In all that we do, we must not mess up with the family. Marriage humbles you to the extent that you are no longer just you. Every decision you take, you are conscious that “how would that decision affect my family?”

Anxious to have a baby boy :

It’s natural that you want to have both sexes: a male and a female. But I am too liberated, exposed to be weighed down with that African mentality that, until you have a boy, you are not complete as a man. There are bank Executive Directors, today, who are women. So, there are no longer limitations; we have a woman fine, if you have a man fine. Train that child to become a delight to himself or herself and the world. I am not worried about not having a male child. My wife used to be, but not anymore. That’s why we have the fourth child. For me, I was okay with three kids. She has accepted what God has given to her and she’s very excited.

We are going to do that some time in future. Every day our marriage is anew. I tell my wife I love her everyday. I tell her that I quite appreciate her for the woman she has become.

My wife knows that I have more female friends than male friends. She knows all my friends and she knows the kind of person that I am. My wife has finally understood that she’s married to a public figure. And she has fitted very well into that role of “he’s my husband” and appreciates what I mean to other people. And it’s working for us.