Popular Nigerian superstar, and Joro crooner Ayodeji Ibrahim Balogun, known professionally as Wizkid has dissed his own country, Nigeria, in the ongoing #GhanavsNigeria Twitter war, asking Nigeria and her citizens to focus on having an uninterrupted power supply.

The singer noted in his tweet that popular Ghanaian act Sardokie has more awards than Davido, Burna Boy and himself combined.

Shading Nigeria for her power issues, the Joro crooner wrote:
“Sarkodie has more awards than Davido and Me Combined And If I even add Burna Boy we’ll still need one more award to catchup with Sarkodie!! My People let’s focus on how to have light o.” 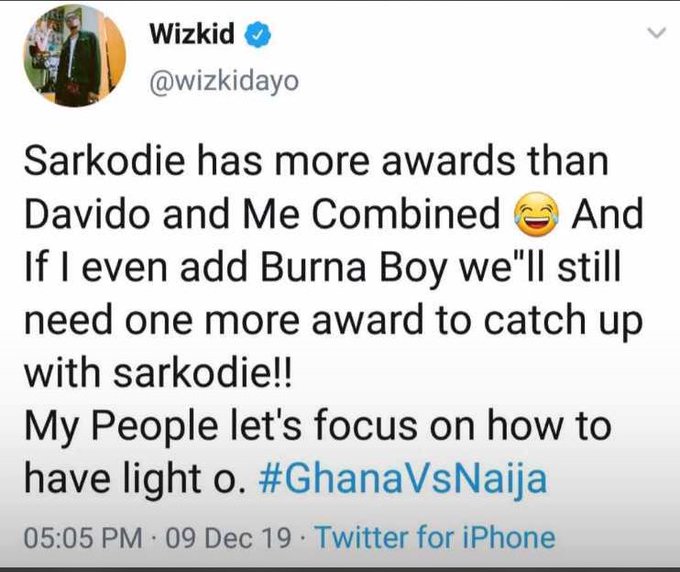 Cardi B opens up on her marriage to Offset: ‘We have a lot of trust’

”This Isn’t A Joke ! TAKE IT DOWN NOW!!!!-Annie Idibia Fires At Blog Who Posted Her Picture Saying She Has Cancer To Gain Traffic

“AT THIS RATE, I’M GOING TO BE SINGLE FOREVER…AND EVER”-DJ Cuppy Cries Out

Dbanj hangs out with Amber rose#Kingdoncome

Tristan Thompson and Mystery Chick out Together Second Time In A...