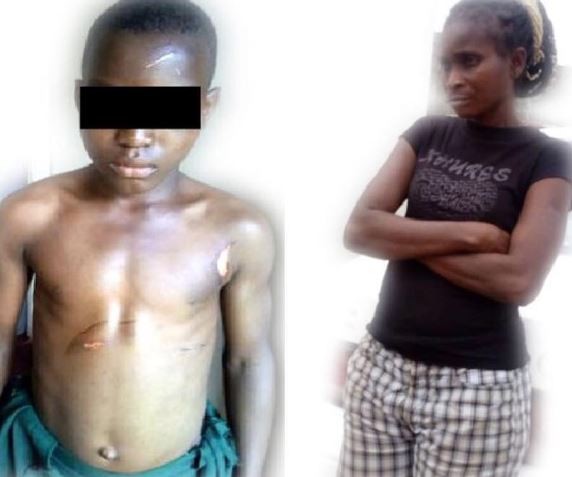 Lagos State police command over the weekend arrested one Sarah Eteigbe for allegedly placing a hot pressing iron on her 12-year-old houseboy, Friday Obi, for taking her soft drink in Bariga area of Lagos.

The 35-year-old trader brought Obi from Imo State, 4 years ago, to live with her in her one-room apartment at 17 Mutairu Street, Pedro, Bariga. Shortly after Obi settled in the house, Sarah allegedly started beating him. Sarah’s landlord and Obi’s teachers were said to have cautioned her against inflicting injuries on the boy whenever she punished him.

The beating came to a head last Friday after teachers noticed bloodstains on his uniform. Upon enquiry, he disclosed that his aunty burnt him with hot pressing iron.

The Local Government Education Authority at Shomolu contacted Coordinator of the Child Protection Network, Toyin Okanlanwon, who subsequently reported the matter to the Police.

During interrogation, Sarah claimed Obi drank a bottle of seven-up “without my permission.” However, while describing his ordeal in the hands of Sarah, Obi said: “she always beats me at the slightest opportunity.  There was a time she cut me with a razor blade. On this day in question, I returned from school late and by the time I got home, there was no food. I had to drink the 7-Up because I was hungry.”

Sarah has since been charged to court. She was granted N200,000 bail and remanded at the Ikoyi Female Prison, pending when she would meet the bail conditions, while the case was adjourned till December 3.

#JusticeForUwa: Police Arrests Of One Suspect Linked To The Killing of Miss Vera Uwaila Omozuwa(Video)